First find yourself a fish market, vegetable store, and football match in the same place 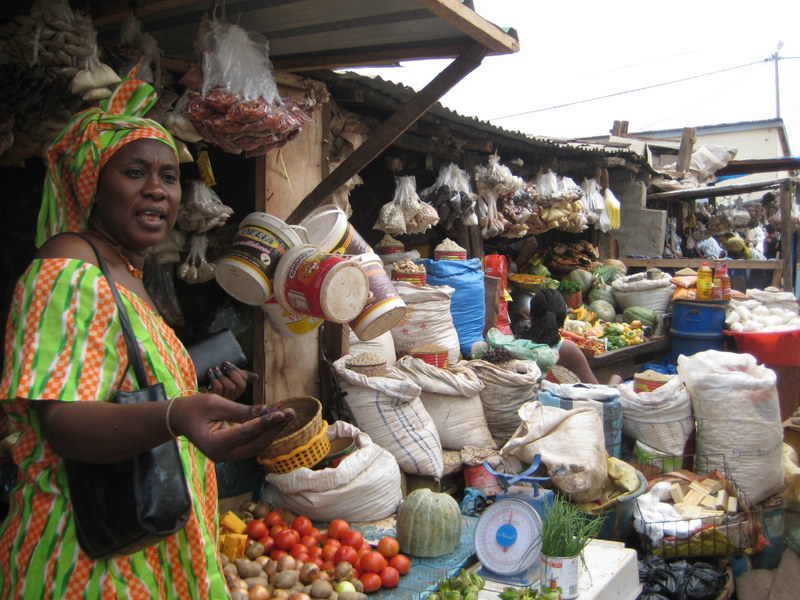 I wanted to know more about the local food, not the spaghetti bolognaise or steak that we were served, but to know just how the locals sourced, prepared and cooked their food.

I was in for a little more than I had anticipated!

We met a local lady, Ida, who runs a small cookery school in Gambia. Ida, originally from The Gambia, studied hotel tourism and catering management in Twickenham in the UK but returned to The Gambia in 1989. Having spent some time working at the popular Senegambia Hotel and then the luxurious Mandina  Lodges at Makasutu, she started running cookery courses from her home in Brufut with the desire to preserve and promote her culture. This she has certainly done by the bucket full!

The noise and smell !

We arrived at Ida’s house and were given traditional costume to wear, 6 of us in all.

We took local transport to the market early in the morning, and wow! The smells, noise and activity was something to experience. Ida makes up her mind what she is going to cook  based on what is available in the market. She barters for the fish, fresh tomatoes, potatoes,

herbs, fresh vegetables and rice. The fish is only minutes  out of the sea and we witness the days catch going from the boat to the bag in exchange for some money, some still flapping!

Other fish are taken to the market stalls and others to a filleting shed. I was still trying to guess what we would be cooking when I felt a tug on my shirt.

Time for a game of football?

A small group of  boys were asking me for something. I asked Ida what they wanted and she said they want a football!

“How much are they” “Oh, equivalent to about a pound UK, but 6 weeks pocket money for them!”

I parted with my money!

5 minutes later I felt another tug, and a different group of boys were also asking me for something? “Ida what do these boys want?” “They also want a football” “Well tell them to go and play with that other group of boys” “They can’t do that, they live on the other side of the main road and they don’t play together”

I parted with my money!

Back to Ida’s and I couldn’t wait to see what we would be cooking and on what. We scraped, de-scaled, peeled, washed, prepared and chopped all the vegetables and fish.

I didn’t quite expect what happened next but supposed by now I should not be surprised. I asked what we would be cooking on and Ida pointed to several tractor hubs that had been  cut in half and modified, and were now glowing red hot in the middle. A barbeque made from tractor hubs and filled with charcoal. “These are good on

I wanted to try cooking “Gambian Style” and Ida invited me to be her Commis chef.

The result was worth it

We a lot of preparation and under Ida’s guidance, had prepared a dish of fish, rice, tomatoes and vegetables.

We ate Gambian style on rugs in her back garden eating with our hands.

There was something quite special about the whole experience which was very humbling. We take for granted our state of the art cookers, combi ovens, and microwaves. But the meal that we produced on tractor hubs filled with charcoal was every bit as good and tasty as some of the meals I have had in  restaurants back in the UK. From the simple fresh ingredients we had bought and with guidance from Ida, produced a traditional Gambian dish very cheaply. Apparently, the most expensive ingredient that I had bought was the two footballs, but the boys smiles were worth every penny!

The floor was hard but the food was good

Catering Consultancy Bureau Limited take your privacy seriously and will only use your personal information to provide the services you have requested from us: Find out more.